The swastika in Germany 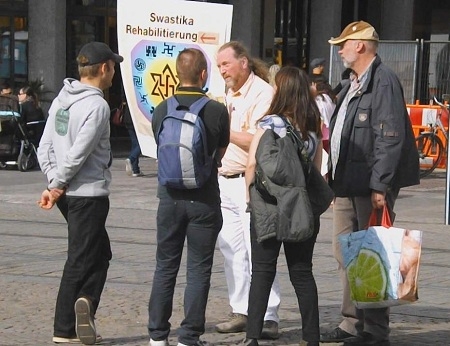 Marcel Hoffmann, leader of the Raelian Movement for Germany, has been cited twice in recent years by the city of Karlsruhe for "displaying signs of anti-constitutional organizations". In both cases, the charges were eventually dropped, see the 2010 abatement of action order as well as the 2012 abatement of action order issued by the city prosecutor.

As a reminder, in 1988 the Munich appeals court [OLG] had already established that the ‘use of the Raelian symbol [which contains the swastika] obviously doesn't contravene against the protection purposes of article 86a of the penal code and is hence not punishable under this statute.’

Marcel went to the city of Karlsruhe again this week and reports:

"Yesterday, October 3rd, was a public holiday in Germany (22 years of reunification). The weather was nice, people were strolling through the streets. I decided to head to downtown Karlsruhe to promote the rehabilitation of the swastika, this part of our religious symbol that is so dear to us and that is so unrecognized and so misunderstood in Germany. In doing so I realized to what extent my action is necessary, especially after 65 to 70 years of efforts by public officials that only left behind misunderstandings and taboos. Luckily, there's still Germany's youth who are correct in not feeling concerned and guilty about the history of another century ..."
חזרה לקטגוריה סקירה כללית   חזרה אל חדשות סקירה כללית
ידיעות קודמות
ידיעות חדשות